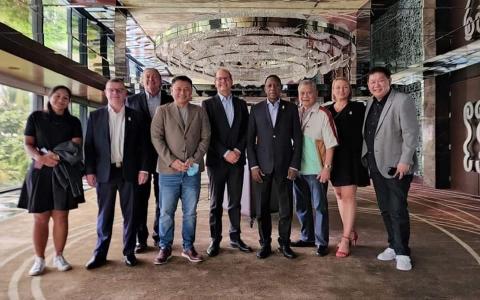 The Philippines’ hosting of the 2023 FIBA World Cup will serve as a stage for the country to showcase itself as both a hoops loving nation and a destination for tourism, Samahang Basketbol ng Pilipinas (SBP) Chairman Senator Sonny Angara said today.

One year before the country opens its doors once again as a host country for the 2023 FIBA World Cup, Angara met with FIBA officials where they discussed the growth of Philippines basketball and the opportunities presented by the event for the Philippines.

FIBA top brass President Hamane Niang and Secretary General Andreas Zagklis met with Angara in preparation for the Philippines’ hosting duties, which it will share with Indonesia and Japan.

A total of 80 national teams are vying for a spot in the 32 team FIBA World Cup through six ongoing qualifying windows.

The World Cup group phase will start on August 25, 2023 in the three host countries while the final phase will be in Manila. The World Cup championship will take place on September 10, 2023.

“We are excited to once again be host to the biggest international tournament for basketball. The last time we hosted this event was in 1978 so this is something that all Filipinos are looking forward to, both as a recognition of the Philippines as one of the biggest markets for the sport and the commitment of the government to open its doors once again to the world,” Angara said.

“It will be a huge opportunity for the whole country, not just in terms of basketball, but also for tourism and business,” he added.

Gilas Pilipinas is already qualified for the 2023 FIBA World Cup based on its global ranking and as host to the tournament.

Angara said the economic benefits brought about by the 2023 FIBA World Cup hosting duties will be on a much larger scale than what it was back in 1978.

“The biggest stars who are brands in themselves and companies will be in the country in August 2023. The last one we hosted was in 1978, but as the FIBA guys mentioned—because of social media and the growth of basketball around the world, this will be much bigger,” Angara said.

As a sports enthusiast himself, Angara said he is looking forward to seeing Gilas battling it out with the best and before a worldwide audience.

He said there are many reasons to be optimistic about Gilas’ chances in the World Cup, including the commitment by Filipino-American star Jordan Clarkson to be part of the team in August 2023 and the support of the PBA for the preparations for the tournament.

“We still have a lot to do in terms of preparations for our hosting duties, but we give our full support to this endeavor, which will benefit our tourism sector and the economy as a whole,” Angara said.