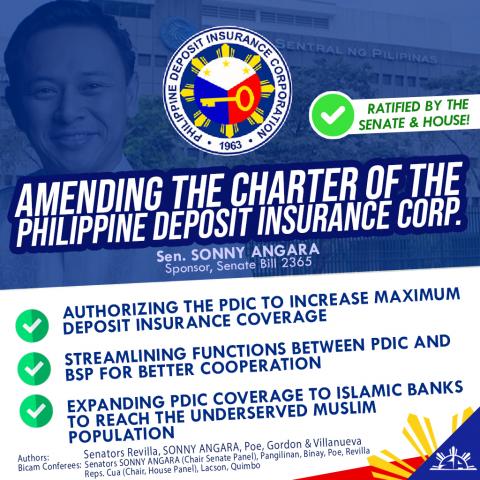 Senator Sonny Angara said today that the latest amendments to the Philippine Deposit Insurance Corporation (PDIC) charter will result in a stronger and more resilient banking system in the country.

A product of extensive consultations with the Bangko Sentral ng Pilipinas (BSP), the academe and stakeholders of the banking and financial sector, Angara said the new charter of the PDIC will streamline the operation of the government corporation so that it could focus on its core function of securing the deposits of the public by providing insurance coverage for banks.

From being an attached corporation of the Department of Finance, the PDIC will now be under the jurisdiction of the BSP.

“This move is logical considering that the PDIC deals with deposit insurance for banks and the BSP, as the country’s Central Bank, sets the monetary policy and has financial supervision over the banks. This will result in better coordination between the two bodies,” said Angara who is the author and sponsor of the bill.

History was also made in the passage of the bill as Angara and his father, the late former Senate President Edgardo Angara were both the sponsors of the latest amendments to the PDIC charter.

The elder Angara was credited with the last amendment to the PDIC charter through Republic Act 9576 in 2009, which raised the deposit insurance coverage from P250,000 to the current P500,000.

This is in line with the move to attach the PDIC to the BSP in order to strengthen the cooperation between the two agencies, to make their collaboration more efficient, and to prevent the possible overlapping of their functions.

Another significant amendment to the charter is the inclusion of certain products and arrangements of Islamic Banks under the ambit of the PDIC in accordance with the objectives of Republic Act 11439 or the law providing for the regulation and organization of Islamic Banks.

The bill authorizes the PDIC to establish separate insurance funds and insurance arrangements in consideration of the Islamic Banking’s peculiar characteristics, and to issue rules and regulations for the establishment of the same.

PDIC will continue to insure deposits of up to P500,000 but under the bill, the Board is authorized to increase the maximum deposit insurance coverage to an amount indexed to inflation or in consideration of other economic indicators as may be deemed appropriate.

The Board is tasked to review the amount of maximum deposit insurance coverage every three years and increase the amount as warranted.

Examination of a bank’s records is allowed only when there is a finding of fraud or unsafe or unsound banking related to deposit taking.

Once a bank is placed under receivership, the PDIC is still authorized to convert the assets of the closed bank to cash but with the new amendments, it is also allowed to sell these assets to a financial institutions strategic transfer corporation (FISTC) in accordance with the recently-enacted Republic Act 11523 or the FIST Act.

“Our hope is that with these amendments to the PDIC charter, we help strengthen and make more resilient our banking sector, which will most definitely play a critical role in the coming years as we try to recover in the wake of the pandemic,” Angara said.

Angara: Funding for the higher social pension for indigent seniors ensured under the 2023 GAA
Angara calls for institutional reforms in CAAP as part of the long-term solutions to the problems of Philippine civil aviation
Angara says funds are available to ensure the continued implementation of the Libreng Sakay program at the start of 2023
Statement of Senate Committee on Finance Chairman Sonny Angara on the Signing of the 2023 GAA
Brownlee’s naturalization will provide a big boost to Gilas Pilipinas
Angara says the Senate budget will provide targeted “ayuda” to the sectors who need it
SENATE APPROVES THE MARCOS ADMINISTRATION'S FIRST BUDGET
Angara pushes for conversion COVID isolation facilities to evacuation centers for disasters
Angara namahagi ng tulong sa mga lugar na sinalanta ng Bagyong Paeng
Angara: It's about time to recognize and do something about the plight of the country's Indigenous Peoples
Angara has high hopes for Philippine sports with the emergence of more winning elite athletes
Angara- Produce more high quality, high paying jobs to address youth unemployment and underemployment
Angara—Philippines’ hosting of 2023 FIBA World Cup presents countless opportunities for RP hoops and tourism
Angara: Focus on producing higher value industries, higher paying jobs to boost economic growth
Angara supports PPPs as the way to go for many local projects to ensure their implementation
Angara celebrates the enactment of three laws for the youth
Statement of Sen Angara on the Enactment into Law of the Social Pension for Seniors
Sen. Angara on the passing of former Pres. Fidel V Ramos
Angara-- Restore the heritage sites damaged by the Abra quake at the soonest possible time
Angara sees the establishment of satellite specialty hospitals as timely and doable
END_OF_DOCUMENT_TOKEN_TO_BE_REPLACED