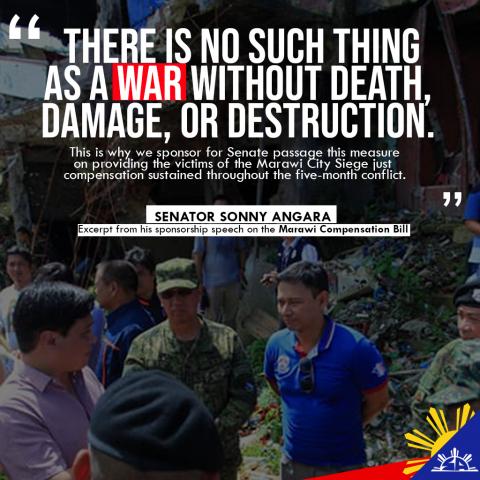 “The biggest casualty were the hopes and dreams of the proud Maranao people,” Angara said.

As the Chairman of the Committee on Finance, Angara reported out the committee report on Senate Bill 2420 which seeks to provide just compensation to the victims of the Marawi City siege for the damage, loss, or destruction of their properties.

Under the bill, tax-free monetary compensation will be provided to the owners of residential, cultural or commercial structures within Marawi’s Most Affected Areas (MAA) and Other Affected Areas (OAA).

Compensation will also be provided to the owners of private properties that were demolished as part of the implementation of the Marawi Recovery, Rehabilitation and Reconstruction Program.

While many of the infrastructure projects, including the reconstruction of the roads, bridges, government buildings, health center, madrasah and even a mosque have already been completed, most of the homes of the displaced Marawi residents have yet to rebuilt.

Angara noted that the residents were not immediately allowed to return to their homes due to the presence of unexploded ordnance left by the conflict.

For those who were allowed a brief visit to their homes to salvage whatever possessions they had left, what they found were just rubble.

The Task Force Bangon Marawi has given the green light for some residents to return to Marawi and rebuild their homes, on the condition that they are able to secure building permits.

A Marawi Compensation Board will be created to administer the distribution of compensation to the claimants.

The Board will consist of nine members—at least three of whom should be members of the Philippine Bar, preferably Maranao lawyers with five years practice. The board should also have one licensed physician; one certified public accountant; one educator and one licensed civil engineer.

“October 23 marks the fourth year anniversary of the end of the Marawi City siege, a very dark and bloody chapter in the attainment of self-rule and autonomy of our Bangsamoro brethren in Mindanao,” Angara said.

“But even the longest urban siege in the history of the Philippines could not stop the enactment of the Bangsamoro Organic Law, which we all believe opens an even brighter, more prosperous chapter not only for the BARMM region, but also for Mindanao, as well as the rest of the country. Indeed with peace shall come prosperity.”

The House of Representatives passed its counterpart measure earlier this month with 126 votes in its favor. ###