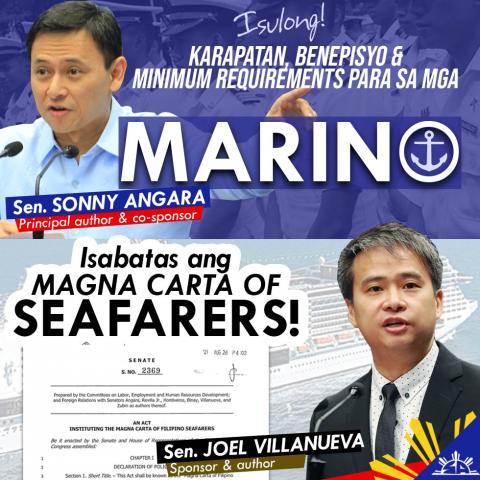 Filipino seafarers will also be provided with various perks and minimum standards of employment, including compulsory benefits like decent accommodation, sanitation, recreation and food facilities.

Angara has championed many laws for the welfare of seafarers and overseas Filipino workers as a whole including the increase in the tax exempt ceiling for balikbayan boxes—from the previous P10,000 to P150,000 as contained in the Customs Modernization and Tariff Act.

This provision has benefited the families of the OFWs and seafarers here in the country who get to enjoy the small tokens they get to send home every year.

The Senator is also the sponsor of the Overseas Workers Welfare Administration Act (OWWA), which gave seafarers representation in the OWWA Board.

Angara also steered the passage of the Seafarers Protection Act, which protects Filipino seafarers from possible abuse by unscrupulous lawyers who charge excessive fees for their entitlements in cases of injury or even death.

“Definitely this Magna Carta of Seafarers will continue the tradition of helping our seafarers. This bill has been pending in the legislative mill for some time, over a decade if I’m not mistaken. I remember filing it when I was still a Congressman. I pay tribute to Sen. Joel Villanueva for using his considerable political skills, his considerable savvy and his hard work in coming up with a version that I think reconciles the interest of the various stakeholders,” Angara said. ###

Angara celebrates the enactment of three laws for the youth
Statement of Sen Angara on the Enactment into Law of the Social Pension for Seniors
Sen. Angara on the passing of former Pres. Fidel V Ramos
Angara-- Restore the heritage sites damaged by the Abra quake at the soonest possible time
Angara sees the establishment of satellite specialty hospitals as timely and doable
Reaksyon ni Sen. Sonny Angara sa SONA ni PBBM
Statement of Senator Sonny Angara
INCOMING DBM SECRETARY NI PBBM, HIGHLY-QUALIFED, MAY MAIPAGMAMALAKING TRACK-RECORD -- ANGARA
Statement of Sen. Sonny Angara on the Appointment of Amenah Pangandaman as DBM Secretary
PDIC charter amendments for a stronger and more resilient banking system—Angara
Kaugnay sa muling paglobo ng COVID cases sa bansa: “MAGPABAKUNA, SUMUNOD SA HEALTH PROTOCOLS AT PATULOY NA PAG-INGATAN ANG KALUSUGAN” - ANGARA
Statement of Committee on Finance Chairman, Sen. Sonny Angara on the signing of the 2022 GAA
Angara reminds PhilHealth of their obligations to the public
Threat of Omicron highlights need to improve biosurveillance and genome sequencing capabilities—Angara
Angara: Don’t let vaccines go to waste-- Allow booster shots for private sector workers
SEN. ANGARA ON THE THREAT OF HOSPITALS TO WITHDRAW FROM PHILHEALTH SYSTEM BECAUSE OF DELAYED REIMBURSMENTS OF CLAIMS:
Angara: Decline in COVID cases should not result in complacency
Angara: Go the extra mile to vaccinate our senior citizens
Angara to DOLE: Targeted interventions needed to ensure no one is left behind
It’s about time to rebuild the homes of the people of Marawi—Angara
END_OF_DOCUMENT_TOKEN_TO_BE_REPLACED