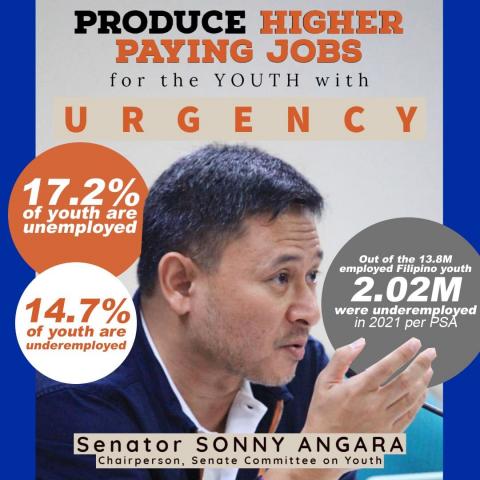 As part of the efforts to address unemployment and underemployment among the Filipino youth,  Senator Sonny Angara said there should be an intensified effort to produce more higher quality and higher paying jobs in the country.

Presiding over a hearing of the Committee on Youth as its chairman, Angara noted that majority of the jobs being occupied by Filipinos between the ages of 15 and 30 are some of the lowest paying in the country.

According to the Philippine Statistics Authority, there are 13.8 million total employed youth in the country and the top industries where they are employed are wholesale and retail, repair of motor vehicles and motorcycles; agriculture and forestry; construction; manufacturing; and administrative and support service activities.

In 2021, the PSA noted that 17.2 percent of the Filipino youth were unemployed while 14.7 percent were underemployed.

This, he said, is the reason why there is a high underemployment rate among the youth, which the PSA estimates to be at 2.02 million in 2021.

“It’s clear to me that the quality of jobs that we produce is what we should be looking after. We should be asking ourselves and our government agencies should be asking themselves what we can do to help enable the private sector to produce higher paying, higher quality jobs,” Angara said.

In order for the government to make a serious dent in the unemployment and underemployment rate, Angara said it cannot be content with just pushing for the creation of the same low paying jobs in the same industries.

Citing a report by the International Labor Organization, Angara noted that young people who lose their jobs or fail to obtain jobs are particularly vulnerable to “scarring” or the phenomenon where their future labor market outcomes are worse than those of their peers even when the economic conditions where they are situated improve.

They are likely to end up accepting jobs for which they are overqualified, which puts them at risk of being trapped in an employment trajectory that involves informality and low pay.

“What we need to do is to have the government agencies involved in job creation to help the private sector, particularly the industries and entrepreneurs, to create higher paying jobs for Filipinos,” Angara said.

This could be through the redirecting of public investments towards digital, care and green economies that will not only produce a significant amount of new jobs but also provide a boost to the country’s gross domestic product over time.

Under the current 19th Congress, Angara has also refiled the bills on National Digital Transformation; the Use of Digital Payments; the Appointment of Local ICT Officers in LGUs; the proposed Artists Incentives Act; and the Inclusion of Creatives in the Balik Scientist Act.

All Filipinos should have access to oral health care-- Angara
Angara backs the imposition of a price ceiling on 120 new medicines
Statement on the passing of former Senate President Nene Pimentel Jr.
Angara—Let’s legalize motorcycles-for-hire now
Seatmates at the IPU
Angara to file resolutions congratulating gold medalists Yulo and Petecio
Angara—Commuting is definitely a challenge. Let’s come up with solutions now
To help local industries, Angara pushes for locally-made slippers and toiletries for hotel guests
The government’s vaccination program may need its own booster shots – Angara
This World Teacher’s Day, let us give our beloved educators the pay that they deserve—Angara
Statement of Finance Committee Chairman Sen. Sonny Angara on the receipt of the 2020 GAB
SENIOR CITIZENS & PWD DISCOUNT CALCULATOR
ANGARA KAMPANTE NA HINDI MAANTALA ANG 2020 BUDGET SA SENADO
Angara sees the need to revive the Pasig River ferry service as an alternative for Metro Manila commuters
Statement on the enactment of RA 11459 or the Judges-at-Large Act
Angara—Let’s address the perennial classroom backlog now
Angara- Government will continue its support for indigent seniors in 2020
Angara: DA has P1 billion in QRFs to augment its budget to tackle the African Swine Fever
Angara seeks to streamline the process for constructing socialized housing units
Angara—Let’s help introduce our heroes to the children through film
END_OF_DOCUMENT_TOKEN_TO_BE_REPLACED