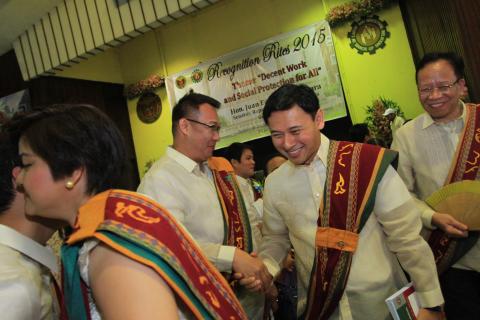 Even as the Department of Education (DepEd) is deliberating on the use of the sablay as the standard garb for graduation rites, Senator Sonny Angara encouraged more schools to adopt this as a means to promote Filipino heritage and for practical purposes.

Angara said local government units around the country could take their cue from the Pasig City government and already use the sablay for the graduation ceremonies of their public elementary and high schools.

“This is one idea that was well thought of, long overdue, and ought to be supported. The sablay not only represents the rich cultural heritage of the Philippines, but is also more suitable for our climate. It also gives Filipino graduates an identity and as a plus, it’s also fashionable,” Angara said.

DepEd undersecretary for administration Alain del Pascua, in an aide memoire, batted for the use of the sablay in place of the toga for graduation ceremonies.

Pascua argued that the toga, with its deep Western roots, “is not Filipino” and “does not inspire loyalty to the nation.”

He added that the use of the sablay could also boost local textile production and spur a resurgence of weaving traditions.

“We should encourage and support efforts to promote the strengthening and propagation of Filipino heritage, culture and traditions. In many areas of the country, including indigenous communities, weaving is their source of livelihood and has been around for generations,” Angara said.

Angara noted that there could be different designs for the sablay in the various regions, provinces, cities, municipalities or even towns.

“The designs could be based on the heritage of the local indigenous peoples for instance or the ancient writing script baybayin. The sablay will be their canvas. It will bear the signature of a particular area or culture. It will be easily identified around the world as being uniquely Filipino,” he said.

Angara has been spearheading a “Tatak Pinoy” or made in the Philippines initiative that seeks to encourage innovation among the different industries in order to add value to the products being offered and to improve competitiveness, among others.

Part of the Tatak Pinoy initiative is the identification of specific industries or products that have the potential to grow and make a niche in the marketplace and to provide the necessary interventions to make this happen.
-30-

Angara celebrates the enactment of three laws for the youth
Statement of Sen Angara on the Enactment into Law of the Social Pension for Seniors
Sen. Angara on the passing of former Pres. Fidel V Ramos
Angara-- Restore the heritage sites damaged by the Abra quake at the soonest possible time
Angara sees the establishment of satellite specialty hospitals as timely and doable
Reaksyon ni Sen. Sonny Angara sa SONA ni PBBM
Statement of Senator Sonny Angara
INCOMING DBM SECRETARY NI PBBM, HIGHLY-QUALIFED, MAY MAIPAGMAMALAKING TRACK-RECORD -- ANGARA
Statement of Sen. Sonny Angara on the Appointment of Amenah Pangandaman as DBM Secretary
PDIC charter amendments for a stronger and more resilient banking system—Angara
Kaugnay sa muling paglobo ng COVID cases sa bansa: “MAGPABAKUNA, SUMUNOD SA HEALTH PROTOCOLS AT PATULOY NA PAG-INGATAN ANG KALUSUGAN” - ANGARA
Statement of Committee on Finance Chairman, Sen. Sonny Angara on the signing of the 2022 GAA
Angara reminds PhilHealth of their obligations to the public
Threat of Omicron highlights need to improve biosurveillance and genome sequencing capabilities—Angara
Angara: Don’t let vaccines go to waste-- Allow booster shots for private sector workers
SEN. ANGARA ON THE THREAT OF HOSPITALS TO WITHDRAW FROM PHILHEALTH SYSTEM BECAUSE OF DELAYED REIMBURSMENTS OF CLAIMS:
Angara: Decline in COVID cases should not result in complacency
Angara: Go the extra mile to vaccinate our senior citizens
Angara to DOLE: Targeted interventions needed to ensure no one is left behind
It’s about time to rebuild the homes of the people of Marawi—Angara
END_OF_DOCUMENT_TOKEN_TO_BE_REPLACED