ANGARA WANTS A 100 PERCENT INCREASE IN SOCIAL PENSION FOR SENIORS 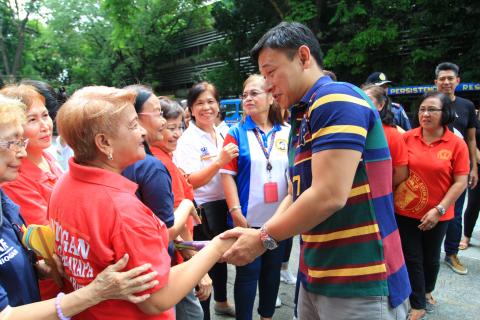 For most individuals, hitting the age of 60 means enjoying the rest of your life, free from work and stress. But not everyone is so lucky.

Citing a study by the Coalition of Services of the Elderly, Sen. Sonny Angara noted that more than half of the country’s senior citizens do not receive any form of pension, a reality that he said is sad but not hopeless.

“They took care of us when we were young, made several sacrifices to provide for our needs and when they reach their twilight years, many are left to fend for themselves,” Angara said.

At present, indigent senior citizens are provided with a social pension amounting to P500 per month or P6,000 a year.

Making good on his campaign promise, Angara has filed Senate Bill 133 that would amend the Expanded Senior Citizen’s Act of 2010, to increase the social pension granted to senior citizens by 100 percent or P12,000 a year.

The bill also widens the coverage to include senior citizens who do not receive any form of pension.

“A review of the social pension system will be done every two years after the effectivity of the law with the intent of raising the monthly stipend as necessary,” Angara said.

“We have to take into account factors such as inflation in reviewing the social pension of our senior citizens,” said Angara, while adding that the coverage of the program can also be expanded further to include those who are receiving below basic pension.