Angara files resolutions honoring the Philippine National Arnis Team and Majority Leader Zubiri, as the father of the sport 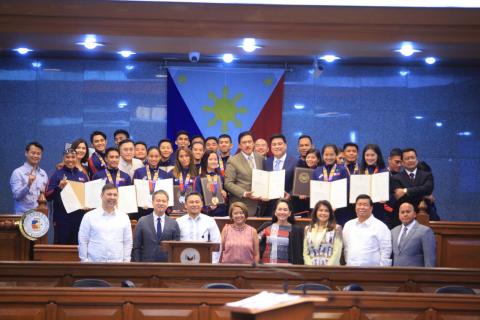 Senator Sonny Angara filed the Senate Resolution No. 247 recognizing the historic feat of the PNAT, which further solidified the Philippines’ mastery of the sport and the martial arts discipline.

The PNAT delivered 14 gold, four silver and two bronze medals for the Philippines, for a total of 20 medals. The gold medal haul of the PNAT represents 10 percent of the total gold medal tally of the Philippine contingent in the SEA Games.

A separate resolution, PSR No. 248, was also filed by Angara to recognize the contributions of Majority Leader Migz Zubiri to the PNAT and to Arnis as a sport.

“We congratulate our Philippine National Arnis Team for bringing honor and glory to the country. It is only fitting that they delivered the most gold medals for the Philippines, considering that arnis is the national martial art and sport of the Philippines,” Angara said.

“Under the stewardship of the Philippine Eskrima Kali Arnis Federation (PEKAF) president and chairman Senate Majority Leader Migz Zubiri, the PNAT has demonstrated how Filipino athletes can excel against international competition. After 14 years of being absent from the SEA Games, Arnis is back and hopefully it is here to stay,” Angara added.

Arnis was included as a demonstration sport in the 2005 SEA Games, which was also hosted by the Philippines.

In the current SEA Games, a total four countries competed in Arnis, namely Cambodia, Myanmar, Vietnam and the Philippines.

The Arnis events were divided into live stick, padded stick and anyo categories for men and women.

“The overwhelming success of the PNAT at the 30th SEA Games is an inspiring testament to the level of excellence that Filipino athletes can achieve, with proper government support,” the resolution stated.

Zubiri was credited for his efforts to strengthen and preserve the practice of Arnis as a martial art and sport.

“The performance of the Philippine Team for Arnis has been a success, not only in its bountiful harvest of medals, but also in its effectiveness in inspiring appreciation and interest in Arnis among Philippine and international audiences alike,” the resolution stated.