Angara: It is time to transform the Philippines from a consuming economy to one that produces 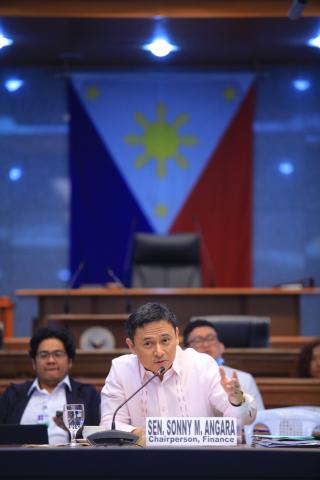 Government was told to urgently craft a “resilience plan” that will allow the economy “to deftly evade” the brunt of the coronavirus pandemic and the shutdown of plants and back offices of Honda, Wells Fargo and other multinationals in the country.

The call was made by Sen. Sonny Angara as the Senate finance committee opens a series of hearings that will draw a roadmap to create world-class products and services that will proudly bear the “Tatak Pinoy” brand.

“Yes, there is no vaccine yet against the virus. But in terms of protecting our economy, in increasing its defenses, I believe that government must have a contingency plan,” Angara said.

Angara said the virus can put “some vulnerable sectors of the economy like tourism in the ICU if we do not mount measures that will cushion its impact. “

Angara’s committee had scheduled “all hands on deck” workshops on how “to evolve a consuming economy to one that produces and invests” long before the global crisis incubated in Wuhan, China.

Angara said that while the government cannot fully control global events, providing a conducive environment for investments is one it can shape.

Angara described as “the nation’s number one project this decade” the fast transformation of the      economy, “preferably within our generation so that more well-paying jobs are created, especially in the countryside.”

He said the Senate finance committee has decided to conduct an inventory of the “patchwork of government programs” to better “leverage the P4.1 trillion national budget into achieving the most important bottom line in spending – jobs for our people.”

“We have to map out all our underutilized assets and use this as a springboard in prioritizing sectors, places and industries that can create wealth using Filipino talent,” he said.

On this, Angara said there is no shortage of Filipino “exemplars” whose products have captured    global acclaim and markets.

“Some of these Tatak Pinoy exemplars are well-known – like furniture designer Kenneth Cobonpue, or the Puentespina family and their award-winning Malagos Chocolate from Davao. Then we have big brands like Jollibee, Oishi, and Bench that are known throughout the world,” he said.


“But then there are other successes worth noting, like the ceramics company CSM Philippines of the Manrique family who have been exporting handmade fine bone china plates, bowls, tea cups and pots to the world,” Angara said.

Other niches carved by Filipinos are in the creative sector of the knowledge economy, Angara said.

He cited Ubisoft, which developed the videogame franchise Assassin’s Creed from its Laguna studio and the Makati-based SG Interactive, which prepares audiovisual presentations of Fortune 500 companies.

Angara believes that “talent is here, as well as the other ingredients, that can create great products and services that can not only compete, but win in the global market,” he said.

INCOMING DBM SECRETARY NI PBBM, HIGHLY-QUALIFED, MAY MAIPAGMAMALAKING TRACK-RECORD -- ANGARA
Statement of Sen. Sonny Angara on the Appointment of Amenah Pangandaman as DBM Secretary
PDIC charter amendments for a stronger and more resilient banking system—Angara
Kaugnay sa muling paglobo ng COVID cases sa bansa: “MAGPABAKUNA, SUMUNOD SA HEALTH PROTOCOLS AT PATULOY NA PAG-INGATAN ANG KALUSUGAN” - ANGARA
Statement of Committee on Finance Chairman, Sen. Sonny Angara on the signing of the 2022 GAA
Angara reminds PhilHealth of their obligations to the public
Angara: Don’t let vaccines go to waste-- Allow booster shots for private sector workers
Threat of Omicron highlights need to improve biosurveillance and genome sequencing capabilities—Angara
SEN. ANGARA ON THE THREAT OF HOSPITALS TO WITHDRAW FROM PHILHEALTH SYSTEM BECAUSE OF DELAYED REIMBURSMENTS OF CLAIMS:
Angara: Decline in COVID cases should not result in complacency
Angara: Go the extra mile to vaccinate our senior citizens
Angara to DOLE: Targeted interventions needed to ensure no one is left behind
It’s about time to rebuild the homes of the people of Marawi—Angara
Angara: Benefits for health workers should continue while the COVID pandemic is in place
Angara urges youth impacted by COVID to avail of jobs under the Expanded SPES Law
Angara: The national budget must be able to keep pace with COVID-19
Angara hopes to finally see the passage of the Magna Carta of Filipino Seafarers
Angara: Move towards digital payments welcome to all sectors
Angara tells DOH to speed up hiring of doctors and nurses for public hospitals
Angara to DOH: Provide health workers with hazard allowance as mandated by law
END_OF_DOCUMENT_TOKEN_TO_BE_REPLACED