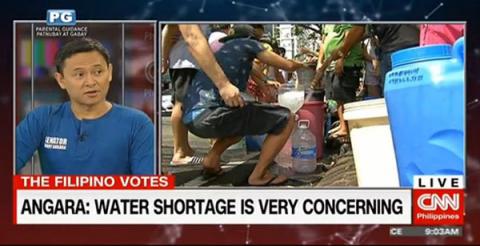 Government should roll out an “El Niño action plan” in food-growing areas in the country before the drought caused by the weather phenomenon unleashes its full brunt on farmers who are also grappling with low prices of rice and coconut.

This was sought by reelectionist Senator Sonny Angara, who also urged a “proactive stance” on the part of the government beginning with designation of an “anti-El Niño czar” who will orchestrate a multiagency response to the dry spell, which is already causing farm harvest to dip.

“A man-made disaster over a natural disaster is a double whammy that will leave less food on the table for families and less income for farmers,” said the senator, who is running under the platform “Alagang Angara.”

He added: “There are threats to agriculture in multiple fronts. Government should help farmers battle the many crises they are facing.”

The lawmaker from Aurora said the government can help by “flooding areas hit by drought or prone to El Niño with assistance.”

These are the Calamity Fund, or what is officially called as the National Disaster Risk Management and Mitigation (NDRMM) Fund; the budget of agriculture agencies like the National Irrigation Administration (NIA); the Rice Competitiveness Enhancement Fund under the recently passed Republic Act 11203 or the Rice Tariffication Law; and the Department of Social Welfare and Development’s funds to aid distressed families.

The P20 billion NDRMM fund can finance preparatory activities in anticipation of an imminent disaster while the P36 billion NIA fund can be used for water-saving measures in government-managed irrigation systems.

Both can be implemented through a work scheme that will tap farmers as laborers, thus providing income to people who would work on infrastructure that will benefit them.

Another funding which can be frontloaded for El Niño mitigation is the P10 billion for safety nets mandated under RA 11203.

There is also a menu of aid programs under the DSWD budget for 2019 which can be harnessed to shield farmers from the effects of the forecasted dry spell.

Statement of Senator Sonny Angara
INCOMING DBM SECRETARY NI PBBM, HIGHLY-QUALIFED, MAY MAIPAGMAMALAKING TRACK-RECORD -- ANGARA
Statement of Sen. Sonny Angara on the Appointment of Amenah Pangandaman as DBM Secretary
PDIC charter amendments for a stronger and more resilient banking system—Angara
Kaugnay sa muling paglobo ng COVID cases sa bansa: “MAGPABAKUNA, SUMUNOD SA HEALTH PROTOCOLS AT PATULOY NA PAG-INGATAN ANG KALUSUGAN” - ANGARA
Statement of Committee on Finance Chairman, Sen. Sonny Angara on the signing of the 2022 GAA
Angara reminds PhilHealth of their obligations to the public
Angara: Don’t let vaccines go to waste-- Allow booster shots for private sector workers
Threat of Omicron highlights need to improve biosurveillance and genome sequencing capabilities—Angara
SEN. ANGARA ON THE THREAT OF HOSPITALS TO WITHDRAW FROM PHILHEALTH SYSTEM BECAUSE OF DELAYED REIMBURSMENTS OF CLAIMS:
Angara: Decline in COVID cases should not result in complacency
Angara: Go the extra mile to vaccinate our senior citizens
Angara to DOLE: Targeted interventions needed to ensure no one is left behind
It’s about time to rebuild the homes of the people of Marawi—Angara
Angara: Benefits for health workers should continue while the COVID pandemic is in place
Angara urges youth impacted by COVID to avail of jobs under the Expanded SPES Law
Angara: The national budget must be able to keep pace with COVID-19
Angara hopes to finally see the passage of the Magna Carta of Filipino Seafarers
Angara: Move towards digital payments welcome to all sectors
Angara tells DOH to speed up hiring of doctors and nurses for public hospitals
END_OF_DOCUMENT_TOKEN_TO_BE_REPLACED