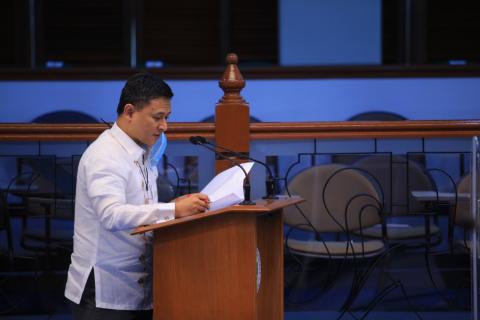 Senator Sonny Angara said the country should begin to experience better internet connectivity even in remote and inaccessible areas once the Department of Information and Communications Technology (DICT) completes the first phase of its National Broadband Program (NBP).

Under the P4.5 trillion General Appropriations Bill that was ratified last Wednesday by Congress, Angara noted that the DICT’s budget for the NBP was doubled from the proposed P902.194 million in the National Expenditure Program to P1.9 billion.

This is on top of the budget for the implementation of the free Wifi in public places and in the state universities and colleges (SUCs) programs of the DICT.

“With bigger investments coming in to the country, this will mean more higher paying jobs and more economic activity,” Angara added.

There has always been a need for a fast, stable and reliable internet connection in the country but Angara said that this is even more urgent now because of the changing requirements of the people under the new normal.

Face-to-face transactions in government and the private sector, as well as in education has led to a greater demand for internet connectivity.

The cost of internet subscriptions for the government alone is a huge amount but with the implementation of the NBP, the DICT promises to bring down the rates significantly.

DICT claims that government will have access to cheaper and more reliable internet services that will reduce government spending on internet subscription once the first phase of the NBP is completed.

The agency noted that government offices spend an average of  P350 per Megabits per second (Mbps) of internet bandwidth a month.

For an average size agency which requires a 100 Mbps shared internet connectivity across a whole building, the cost would be P35,000 per month, or P420,000 a year.

The DICT expects the government to save P720 million in internet subscription expenses in the first year of implementation of the NBP.

For the free Wifi in public places, the budget of the DICT for this purpose was increased by P250 million, bringing up the total to P2.667 billion.

As for the free Wifi in SUCs, Congress also increased the budget to P557.8 million.

“With our schools barred from conducting face-to-face teaching, students have been forced to adapt to flexible and distance learning methods. Expanding the access and reliability of our internet connections will go a long way in helping our children transition easier, especially for those who cannot afford to pay for their own subscriptions,” Angara said.

Statement of Senator Sonny Angara
INCOMING DBM SECRETARY NI PBBM, HIGHLY-QUALIFED, MAY MAIPAGMAMALAKING TRACK-RECORD -- ANGARA
Statement of Sen. Sonny Angara on the Appointment of Amenah Pangandaman as DBM Secretary
PDIC charter amendments for a stronger and more resilient banking system—Angara
Kaugnay sa muling paglobo ng COVID cases sa bansa: “MAGPABAKUNA, SUMUNOD SA HEALTH PROTOCOLS AT PATULOY NA PAG-INGATAN ANG KALUSUGAN” - ANGARA
Statement of Committee on Finance Chairman, Sen. Sonny Angara on the signing of the 2022 GAA
Angara reminds PhilHealth of their obligations to the public
Angara: Don’t let vaccines go to waste-- Allow booster shots for private sector workers
Threat of Omicron highlights need to improve biosurveillance and genome sequencing capabilities—Angara
SEN. ANGARA ON THE THREAT OF HOSPITALS TO WITHDRAW FROM PHILHEALTH SYSTEM BECAUSE OF DELAYED REIMBURSMENTS OF CLAIMS:
Angara: Decline in COVID cases should not result in complacency
Angara: Go the extra mile to vaccinate our senior citizens
Angara to DOLE: Targeted interventions needed to ensure no one is left behind
It’s about time to rebuild the homes of the people of Marawi—Angara
Angara: Benefits for health workers should continue while the COVID pandemic is in place
Angara urges youth impacted by COVID to avail of jobs under the Expanded SPES Law
Angara: The national budget must be able to keep pace with COVID-19
Angara hopes to finally see the passage of the Magna Carta of Filipino Seafarers
Angara: Move towards digital payments welcome to all sectors
Angara tells DOH to speed up hiring of doctors and nurses for public hospitals
END_OF_DOCUMENT_TOKEN_TO_BE_REPLACED