This World Teacher’s Day, let us give our beloved educators the pay that they deserve—Angara 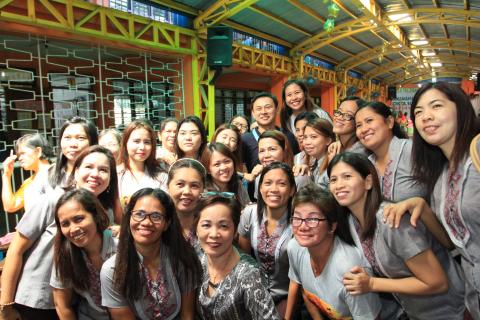 Senator Sonny Angara reiterated his call to hike the salaries of public school teachers in recognition of the critical role they play in the lives of our children and in nation building.

Senate Bill 131 filed by Angara calls for an increase in the starting pay of public school teachers, from the present Salary Grade 11 (P20,754) to Salary Grade 19 (P45,269) based on the fourth tranche of the Salary Standardization Law.

A corresponding upgrade in the salaries of the rest of the teachers above the entry level would also be implemented.

The upgrade in salaries will be done over a period of five years so that the Department of Budget and Management will be able to make the necessary budgetary adjustments.

“Sometimes we forget just how important the role teachers play in our lives. We take for granted the hard work that they put in to craft our children into productive members of society,” Angara said.

“Without our teachers, parents would have to make great sacrifices to educate their children and many of them can’t afford to do this. That is why we should at the very least raise their salaries to a level that will recognize their value,” Angara added.

The increase in the pay of the 800,000 public school teachers was something that was also promised by President Duterte.

Over the years, the salaries of policemen and soldiers have gone up, but the teachers pay have remained the same.

Angara said the adjustment in the salary grades of teachers is also justified considering the rising cost of living.

Apart from their personal expenses, Angara noted that for many of the teachers, they also have to spend a portion of their salaries for the purchase of teaching supplies because many times they do not get enough from their budgets to pay for these.

INCOMING DBM SECRETARY NI PBBM, HIGHLY-QUALIFED, MAY MAIPAGMAMALAKING TRACK-RECORD -- ANGARA
Statement of Sen. Sonny Angara on the Appointment of Amenah Pangandaman as DBM Secretary
PDIC charter amendments for a stronger and more resilient banking system—Angara
Kaugnay sa muling paglobo ng COVID cases sa bansa: “MAGPABAKUNA, SUMUNOD SA HEALTH PROTOCOLS AT PATULOY NA PAG-INGATAN ANG KALUSUGAN” - ANGARA
Statement of Committee on Finance Chairman, Sen. Sonny Angara on the signing of the 2022 GAA
Angara reminds PhilHealth of their obligations to the public
Angara: Don’t let vaccines go to waste-- Allow booster shots for private sector workers
Threat of Omicron highlights need to improve biosurveillance and genome sequencing capabilities—Angara
SEN. ANGARA ON THE THREAT OF HOSPITALS TO WITHDRAW FROM PHILHEALTH SYSTEM BECAUSE OF DELAYED REIMBURSMENTS OF CLAIMS:
Angara: Decline in COVID cases should not result in complacency
Angara: Go the extra mile to vaccinate our senior citizens
Angara to DOLE: Targeted interventions needed to ensure no one is left behind
It’s about time to rebuild the homes of the people of Marawi—Angara
Angara: Benefits for health workers should continue while the COVID pandemic is in place
Angara urges youth impacted by COVID to avail of jobs under the Expanded SPES Law
Angara: The national budget must be able to keep pace with COVID-19
Angara hopes to finally see the passage of the Magna Carta of Filipino Seafarers
Angara: Move towards digital payments welcome to all sectors
Angara tells DOH to speed up hiring of doctors and nurses for public hospitals
Angara to DOH: Provide health workers with hazard allowance as mandated by law
END_OF_DOCUMENT_TOKEN_TO_BE_REPLACED