ANGARA SEEKS AN INQUIRY INTO ALL PHILHEALTH-RELATED SCAMS 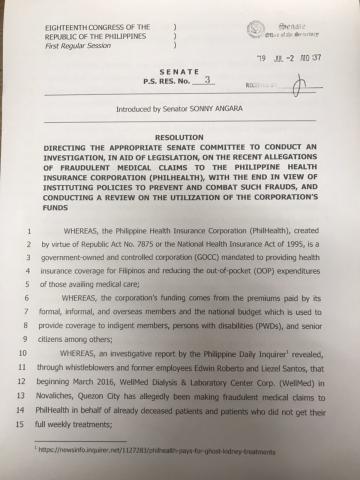 Before Republic Act 11223 or the Universal Health Care (UHC) Act is implemented in full, we must make sure that the funds allocated for this purpose are being spent properly, according to Sen. Sonny Angara, who noted with dismay the various scams hounding the Philippine Health Insurance Corporation (PhilHealth).

As one of the authors of the UHC, Angara fumed at recent reports of how a dialysis center was making fraudulent claims from PhilHealth for patients suffering from kidney disease.

The senator has filed a resolution seeking a probe into all the allegations of fraudulent medical claims to PhilHealth because “funds that are intended for the poor and for those who are in actual need of medical assistance should be protected.”

“We want to get to the bottom of all these reported scams, identify the personalities behind them, and come up with policies to prevent similar cases from taking place in the future,” Angara said.

Congress recently approved the bill that will raise the excise tax on tobacco, heated tobacco and vapor products in order to cover for the budgetary gaps for the full implementation of the UHC. A total of P257 billion is needed for the first year of implementation alone.

It was reported that PhilHealth has lost a total of P154 billion since 2013 due to these scams, the latest of which involved the ‘ghost’ dialysis treatments.

The scam was uncovered after former employees of WellMed Dialysis and Laboratory Corp. based in Novaliches, Quezon City, came out as whistleblowers regarding the alleged fraudulent claims made by their former employer to PhilHealth.

They noted that WellMed claimed funds for dialysis treatments of patients who were not able to avail of their weekly sessions and even for those were already dead.

The firm was able to exploit the system owing to the fact that PhilHealth relied only on the monitoring and reporting of their accredited health care providers on the status of their patients receiving medical services.