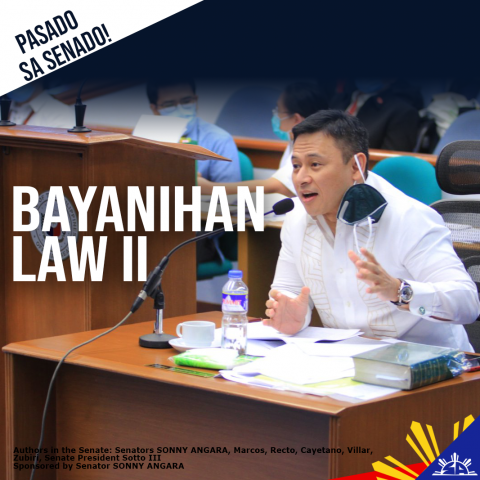 The Senate has approved on third and final reading Senate Bill 1564 or the Bayanihan to Recover as One Act (Bayanihan 2) to allow the government to continue its COVID-19 response and help the affected sectors in recovering from the impacts of the pandemic.

Senator Sonny Angara, the bill’s author and sponsor, said the Bayanihan 2 will effectively extend the validity of the government’s COVID-19 programs and interventions under Republic Act 11469 or the Bayanihan to Heal as One Act, which lapsed last June 5, 2020.

“With Bayanihan 2, the government would be assured of sufficient funding for the ramped up testing for COVID-19 and for contact tracing. It will also ensure that our valiant health workers who contract or succumb to the disease will continuously receive financial support,” Angara said.

“The new law will also allow the government to continue providing assistance to Filipino businesses and workers impacted by the pandemic, including our OFWs who were either repatriated or whose deployments were suspended,” he added.

During President Duterte’s 5th State of the Nation Address, he asked Congress to support the passage of the Bayanihan to Recover as One Act to “supplement funds for recovery and response against the impact of the COVID-19 pandemic.”

A total of P140 billion will be appropriated to fund the provisions of the law, a figure which was reached after long consultations with the economic managers.

For the procurement of PCR testing and extraction kits and corresponding supplies including enhancement of DOH capacities in programs involving elimination and control of other diseases, a total of P10 billion will be appropriated.

A total of P15 billion will go to the cash-for-work program and the Tulong Panghanapbuhay sa Ating Disadvantaged/Displaced Workers or TUPAD of the Department of Labor and Employment.

To help the displaced workers, including probationary, project, seasonal, contractual and casual employees in private health institutions, tourism, culture and arts, creative industries, construction, public transportation, trade industries, and other sectors of the economy as may be identified by the DOLE, a total of P17 billion will be provided as unemployment or involuntary separation assistance.

Also included in this benefit package are the freelancers, self-employed and repatriated OFWs, including OFWs whose deployment were suspended due to a government-imposed deployment ban.

For the agriculture sector, P17 billion will go to the Plant, Plant, Plant program, including cash subsidies and interest-free loans under the Agricultural Credit Policy Council and GFIs.

To assist the affected members of the transport sector, a total of P17 billion will go to the Department of Transportation for the provision of interest rate subsidies and the provision of temporary livelihood to displaced workers.

The tourism industry, which was among the hardest hit by the pandemic, will get P10 billion through the Department of Tourism for assistance to the critically-impacted businesses.

For education, there will be assistance for the state universities and colleges for the development of smart campuses to implement the flexible learning modality.

The Technical Education and Skills Development Authority will also get additional funds for its training for work scholarship program and special training for employment program for the retooling, retraining and upskilling of displaced workers, including the returning OFWs.

Bayanihan 2 will also pave the way for the continuation of programs under Bayanihan 1 such as the provision of emergency subsidies for areas placed under enhanced community quarantine; the swift procurement of essential equipment such as: medical supplies and equipment to be used for COVID-19, goods and services for social amelioration measures, construction of temporary medical facilities, and other critical services for distribution centers and temporary medical facilities; the utilization by LGUs of more than five percent of the amount allocated for their calamity fund; the grant of grace period for the payment of loans and residential rents and the engagement of temporary human resources for health.