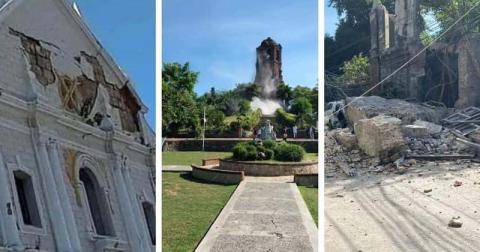 Senator Sonny Angara today called for the inspection and restoration of the heritage sites damaged by the magnitude 7.3 earthquake to ensure their preservation.

At least five persons were killed and over 100 more were injured as a result of the earthquake that originated in Abra last Wednesday.

Apart from the human casualties, the quake also damaged infrastructure, residential buildings and historic/heritage sites, including those in the Ilocos Region.

The Department of Tourism identified the following heritage sites that were damaged by the earthquake: Sta. Catalina de Alejandria Church, San Lorenzo Ruiz Shrine, Vigan Cathedral, Bantay Bell Tower, the St. John the Baptist Church, and heritage houses such as the Syquia House in Vigan City.

“It is heartbreaking to see the destruction caused by the earthquake. There should be no let-up in the effort to provide assistance to the families affected by the calamity, including the rebuilding of their homes so that they can return to their normal lives as early as possible,” Angara said

While the relief and reconstruction work is underway, Angara said a parallel effort should be undertaken to protect the historic structures so as not to cause further destruction.

“These historical sites are more than just landmarks and tourist attractions, but form part of our country’s rich culture and heritage,” Angara said.

As the principal author of Republic Act 10066 or the National Cultural Heritage Act, Angara said there is an endowment fund that can be tapped for the restoration effort.

The establishment of the National Endowment for Culture and the Arts is provided under Article XIV, Section 50 of RA 10066.

Angara said the fund that is being administered by the National Commission for Culture and the Arts is held in a special account in the Bureau of Treasury and can be used exclusively for the implementation of culture and arts programs and projects.

RA 10066 states that “all cultural properties declared as important cultural property may also receive government funding for its protection, conservation and restoration.”

The National Historical Commission of the Philippines (NHCP) has committed to rehabilitate the damaged historic sites and structures with the help of the local government units concerned and the cultural property owners.

Angara also urged the private sector to take part in the relief and reconstruction efforts, including the repair of the damaged historical sites.

“These structures offer us a glimpse into the country’s past and should be preserved for future generations. The rehabilitation process should also take into consideration introducing improvements to make them up to code, if possible,” Angara said.
The Senator’s father, the late former Senate President Edgardo Angara Sen. Angara was instrumental in the enactment of several landmark laws on the preservation and promotion of culture and the arts including RA 7536 or the NCCA Law and the National Museum Act.###

Angara: Funding for the higher social pension for indigent seniors ensured under the 2023 GAA
Angara calls for institutional reforms in CAAP as part of the long-term solutions to the problems of Philippine civil aviation
Angara says funds are available to ensure the continued implementation of the Libreng Sakay program at the start of 2023
Statement of Senate Committee on Finance Chairman Sonny Angara on the Signing of the 2023 GAA
Brownlee’s naturalization will provide a big boost to Gilas Pilipinas
Angara says the Senate budget will provide targeted “ayuda” to the sectors who need it
SENATE APPROVES THE MARCOS ADMINISTRATION'S FIRST BUDGET
Angara pushes for conversion COVID isolation facilities to evacuation centers for disasters
Angara namahagi ng tulong sa mga lugar na sinalanta ng Bagyong Paeng
Angara: It's about time to recognize and do something about the plight of the country's Indigenous Peoples
Angara has high hopes for Philippine sports with the emergence of more winning elite athletes
Angara- Produce more high quality, high paying jobs to address youth unemployment and underemployment
Angara—Philippines’ hosting of 2023 FIBA World Cup presents countless opportunities for RP hoops and tourism
Angara: Focus on producing higher value industries, higher paying jobs to boost economic growth
Angara supports PPPs as the way to go for many local projects to ensure their implementation
Angara celebrates the enactment of three laws for the youth
Statement of Sen Angara on the Enactment into Law of the Social Pension for Seniors
Sen. Angara on the passing of former Pres. Fidel V Ramos
Angara-- Restore the heritage sites damaged by the Abra quake at the soonest possible time
Angara sees the establishment of satellite specialty hospitals as timely and doable
END_OF_DOCUMENT_TOKEN_TO_BE_REPLACED