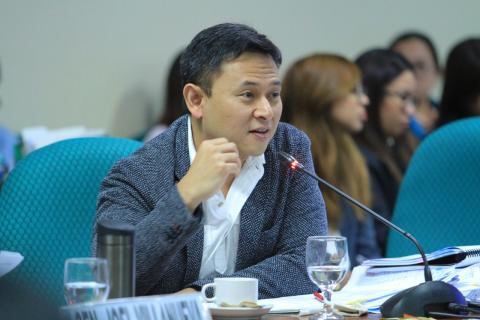 - There should be no room for absurd interpretations of the law-

Senator Sonny Angara is set to file a bill amending Republic Act 10592 or the Good Conduct Time Allowance (GCTA) act in order to plug the loopholes in the existing law.

When convicted murderer and rapist former Calauan, Laguna Mayor Antonio Sanchez was almost released from prison last week as a result supposedly of the provisions of the GCTA, the entire nation responded with outrage.

Angara, who authored House Bill 417 during the 16th Congress, explained that the legislation he introduced covered only Section 1 of RA 10592 on GCTA for persons under preventive imprisonment or those who are still being tried in court.

However, the final version that was approved by Congress was the one introduced by the Senate, which expanded the scope of HB 417 to include the grant of GCTA to convicted criminals.

When RA 10592 was enacted, a DOJ-DILG Uniform Manual on Time Allowances and Services of Sentence was also released to serve as guidelines on how to grant these time allowances to inmates.

“Due to the immense discretion provided to the implementing agencies on the operationalization of time allowances, as well as in the determination of what constitutes good conduct, the law is allegedly being exploited to benefit undeserving felons,” Angara said.

“Worse, recent reports have surfaced detailing how those convicted of heinous crimes are using a ‘loophole’ of the law to avail of time allowances even when the offenders were charged with other crimes while still in jail. It should be highlighted that this is not, and never has been the intention of RA 10592,” Angara added.

Angara said the interpretation and application of the law was absurd in the case of Sanchez, who apart from being convicted of heinous crimes, continued to commit violations while incarcerated.

Among the various crimes Sanchez committed while in prison was for possession of 1.5 kilograms of shabu, which he stashed inside the statue of the Blessed Virgin Mary in his cell.

“We should leave no room for crazy interpretations of the law. That is why we are introducing amendments so that the true spirit of the original law will be preserved,” Angara said.

Under Angara’s bill, a definition of heinous crimes will be included for the purpose of applying exclusions in the coverage of the law.

Recidivists, habitual delinquents, escapees and persons convicted of heinous crimes will be excluded from GCTAs.

“The present law excludes these types of persons from GCTA while under preventive imprisonment. It only makes sense that the same standard should apply to convicted felons,” Angara said.

Mandatory notice to the victims and their families and publication of names of prisoners who are scheduled for release as a result of GCTA will also be required under the proposed bill.

The provision of RA 10592 making the grant of GCTA irrevocable will also be deleted under Angara’s bill.

Inmates who violate prison rules or commit offenses while serving their sentences will also face forfeiture of GCTAs granted to them either in part or in full.

The bill also provides stiff penalties for the issuance of false certificates of good conduct by the prison authorities.

“While we acknowledge the need to introduce efforts to rehabilitate and reform those convicted, certain circumstances must be considered in order to deter those underserving from exploiting the good-natured intent of the law,” Angara said.