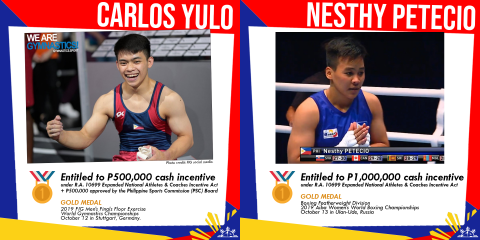 “Over the weekend, Carlos and Nesthy gave the entire nation two huge reasons to celebrate with their individual accomplishments in the fields of gymnastics and boxing. They have instilled so much pride in Philippine sports and served as inspiration to our athletes to excel in their respective fields,” Angara said.

Yulo qualified for the 2020 Tokyo Olympics after his performance in the 41st FIG Artistic Gymnastics World Championships at Hans Schleyer Halle in Stuttgart, Germany.

His ranking in the men’s individual all around competition was what gave him his slot in the 2020 Tokyo Games but he also capped this feat with a gold medal victory floor exercise event. He is the first Filipino to win a gold medal in a world gymnastics event.

Last month, pole vaulter EJ Obiena also qualified for the Tokyo Olympics after clearing 5.81 meters in an athletics meet in Chiara, Italy. The Olympic standard for pole vault is 5.80 meters.

“We now have at least two qualifiers for the 2020 Tokyo Olympics. With the way Yulo and Obiena have performed, we are all looking forward to seeing them compete with the best in the world in the quadrennial games,” Angara said.

In the case Petecio, she took home the gold medal after beating hometown bet Liudmila Vorontsova in the featherweight division final of the 2019 Aiba Women’s World Boxing Championships last Saturday in Ulan-Ude, Russia.

Petecio was just the second Filipina to win gold in the 2012 world championships in the featherweight division.

During these times when Filipinos are faced with so many challenges and bad news, it is feats like these that give us hope and something to cheer for.

Apart from the accolades, the Yulo and Petecio are also entitled to cash incentives provided under Republic Act 10699 or the National Athletes and Coaches Benefits and Incentives Act.

For qualifying for the Olympics, the 19-year-old Yulo is entitled to receive P500,000. The Philippine Sports Commission has announced that Yulo will be provided with an additional P500,000 for winning the first ever gold in gymnastics for the Philippines.

Petecio will receive P1 million for winning gold while fellow boxer Eumir Marcial will get P500,000 for his silver medal finish in the men’s middleweight division in the same event.

Angara was one of the authors and the sponsor of RA 10699. He has also filed Senate Bill 330, creating the Philippine High School for Sports, which seeks to develop the country’s national athletes while providing them with quality education.

INCOMING DBM SECRETARY NI PBBM, HIGHLY-QUALIFED, MAY MAIPAGMAMALAKING TRACK-RECORD -- ANGARA
Statement of Sen. Sonny Angara on the Appointment of Amenah Pangandaman as DBM Secretary
PDIC charter amendments for a stronger and more resilient banking system—Angara
Kaugnay sa muling paglobo ng COVID cases sa bansa: “MAGPABAKUNA, SUMUNOD SA HEALTH PROTOCOLS AT PATULOY NA PAG-INGATAN ANG KALUSUGAN” - ANGARA
Statement of Committee on Finance Chairman, Sen. Sonny Angara on the signing of the 2022 GAA
Angara reminds PhilHealth of their obligations to the public
Angara: Don’t let vaccines go to waste-- Allow booster shots for private sector workers
Threat of Omicron highlights need to improve biosurveillance and genome sequencing capabilities—Angara
SEN. ANGARA ON THE THREAT OF HOSPITALS TO WITHDRAW FROM PHILHEALTH SYSTEM BECAUSE OF DELAYED REIMBURSMENTS OF CLAIMS:
Angara: Decline in COVID cases should not result in complacency
Angara: Go the extra mile to vaccinate our senior citizens
Angara to DOLE: Targeted interventions needed to ensure no one is left behind
It’s about time to rebuild the homes of the people of Marawi—Angara
Angara: Benefits for health workers should continue while the COVID pandemic is in place
Angara urges youth impacted by COVID to avail of jobs under the Expanded SPES Law
Angara: The national budget must be able to keep pace with COVID-19
Angara hopes to finally see the passage of the Magna Carta of Filipino Seafarers
Angara: Move towards digital payments welcome to all sectors
Angara tells DOH to speed up hiring of doctors and nurses for public hospitals
Angara to DOH: Provide health workers with hazard allowance as mandated by law
END_OF_DOCUMENT_TOKEN_TO_BE_REPLACED