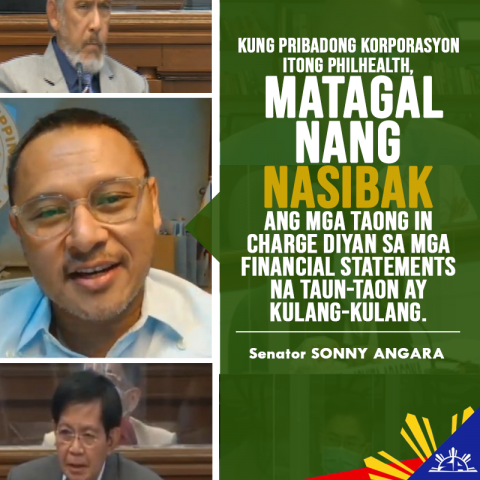 A persistent lack of transparency and accountability has contributed to the financial troubles being faced by the Philippine Health Insurance Corporation (PhilHealth), Senator Sonny Angara said today.

Angara noted that the Commission on Audit (COA) issued a disclaimer of opinion for 2018 on the fairness of the presentation of PhilHealth’s financial statement due to questions about the benefits claims expense and doubts about the accuracy of the collections made by the corporation.

COA also noted that it could not establish the accuracy of PhilHealth’s restated financial statement for 2017 because it was not supported with complete and relevant documents.

Addressing PhilHealth Fund Management Sector SVP Renato Limsiaco Jr. during the Senate’s committee of the whole hearing on the controversies surrounding the state health insurer, Angara aired his frustration at the failure of the institution to shape up in spite of the repeated adverse findings issued by COA.

“Basically, what the COA has been saying for many years now is PhilHealth has not been transparent because mayroon siyang mga understated or overstated income. Tapos yung benefit payments hindi supported,” Angara said.

In the case of PhilHealth, Angara said the requirement of accountability should even be higher considering that public funds are at stake.

Angara welcomed the decision of COA to conduct a special audit on PhilHealth, which he has been pushing for in response to the controversies that have emerged in recent months.

He urged the state auditing firm to include the Interim Reimbursement Mechanism being used by PhilHealth for settling claims on COVID-19 cases by health facilities to determine if the process is fair and aboveboard.

Numerous allegations have been made about how PhilHealth seems to be favoring some facilities over others, including those that do not even cater to COVID-19 patients.

PhilHealth Legal Sector SVP Rodolfo del Rosario Jr. noted that the firm has performed data analytics on various cases including pneumonia and found that “it is highly improbable for some areas to have a sudden increase in pneumonia” and that the report “points to upcasing in those particular areas.”

INCOMING DBM SECRETARY NI PBBM, HIGHLY-QUALIFED, MAY MAIPAGMAMALAKING TRACK-RECORD -- ANGARA
Statement of Sen. Sonny Angara on the Appointment of Amenah Pangandaman as DBM Secretary
PDIC charter amendments for a stronger and more resilient banking system—Angara
Kaugnay sa muling paglobo ng COVID cases sa bansa: “MAGPABAKUNA, SUMUNOD SA HEALTH PROTOCOLS AT PATULOY NA PAG-INGATAN ANG KALUSUGAN” - ANGARA
Statement of Committee on Finance Chairman, Sen. Sonny Angara on the signing of the 2022 GAA
Angara reminds PhilHealth of their obligations to the public
Angara: Don’t let vaccines go to waste-- Allow booster shots for private sector workers
Threat of Omicron highlights need to improve biosurveillance and genome sequencing capabilities—Angara
SEN. ANGARA ON THE THREAT OF HOSPITALS TO WITHDRAW FROM PHILHEALTH SYSTEM BECAUSE OF DELAYED REIMBURSMENTS OF CLAIMS:
Angara: Decline in COVID cases should not result in complacency
Angara: Go the extra mile to vaccinate our senior citizens
Angara to DOLE: Targeted interventions needed to ensure no one is left behind
It’s about time to rebuild the homes of the people of Marawi—Angara
Angara: Benefits for health workers should continue while the COVID pandemic is in place
Angara urges youth impacted by COVID to avail of jobs under the Expanded SPES Law
Angara: The national budget must be able to keep pace with COVID-19
Angara hopes to finally see the passage of the Magna Carta of Filipino Seafarers
Angara: Move towards digital payments welcome to all sectors
Angara tells DOH to speed up hiring of doctors and nurses for public hospitals
Angara to DOH: Provide health workers with hazard allowance as mandated by law
END_OF_DOCUMENT_TOKEN_TO_BE_REPLACED