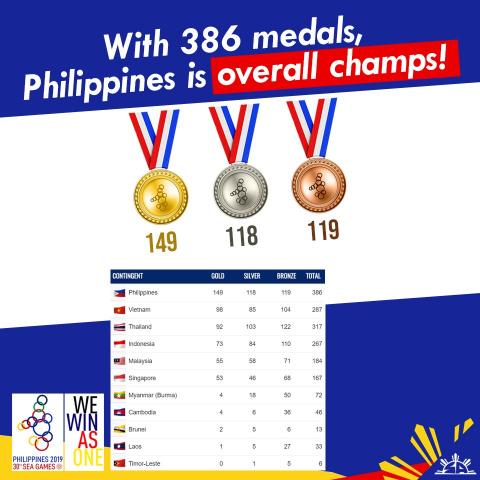 With close to 400 medals won by the Philippine contingent in the 30th Southeast Asian Games (SEA Games), the national team has brought tremendous pride to the country.

Part of the impressive medal haul were 149 gold medals, a feat that was achieved through hard work and a lot of personal sacrifice on the part of the Philippine contingent.

In recognition of the stellar performance of the Philippine national athletes and to show the country’s gratitude to them, Senator Sonny Angara has filed a bill seeking to increase the cash incentives for podium finishes in the SEA Games and Asian-level sporting events.

“What our national athletes achieved in the SEA Games is truly historic and should be heralded. It was not only how they performed in their respective sports, but the way they carried themselves during the games that captured the hearts of Filipinos and our ASEAN neighbors alike,” Angara said.

“With such a stellar performance, it is only fitting that our national athletes and their coaches receive higher incentives from the government as they go on to compete in other international competitions,” Angara said.

Senate Bill 1225 seeks to amend Republic Act 10699 or the National Athletes and Coaches Benefits and Incentives Act, which was sponsored by Angara, and was enacted into law during the 16th Congress.

RA 10699 repealed the original Sports Benefits and Incentives Act of 2001 in order to provide bigger benefits to the country’s national athletes, coaches and trainers whenever they win during international competitions.

The increases as proposed in SB 1225 are as follows:

“The added incentives will encourage Filipinos to engage in sports, especially those which have yet to attract mainstream popularity, and represent the country in the future,” Angara said.