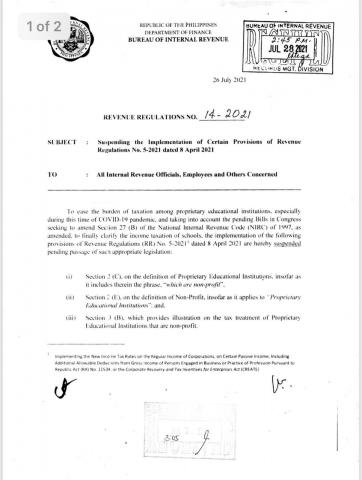 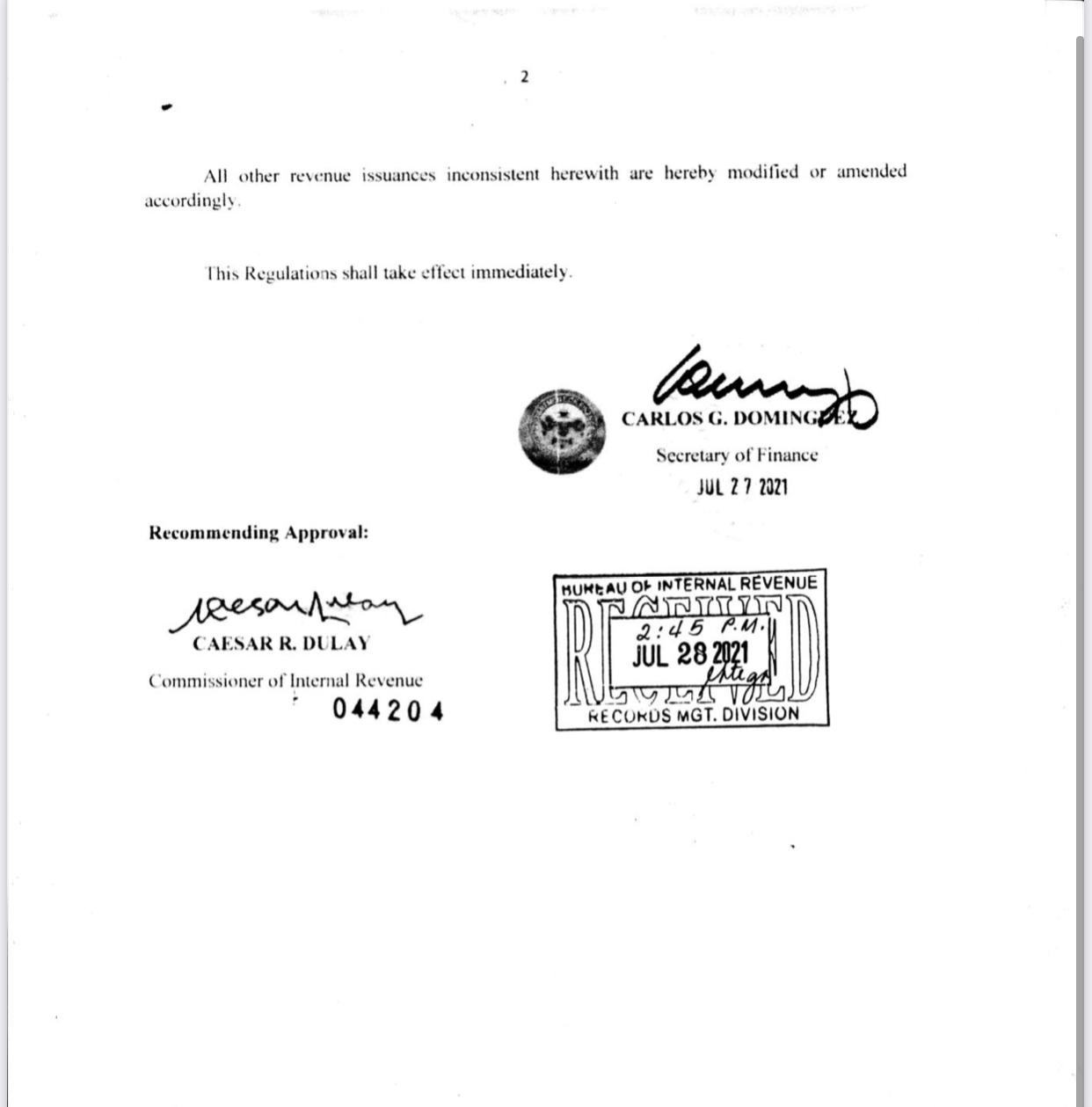 Senator Sonny Angara today thanked Finance Secretary Carlos Dominguez for suspending the implementation of the provisions of Revenue Regulations No. 5-2021 pertaining to the tax on schools.

“Maraming salamat Secretary Dominguez and BIR Commissioner Dulay for heeding the clamor private educators who share with government the burden of teaching our youth. This is what I call a taxation timeout. Now, the ball is on the court of Congress to permanently fix the confusion caused by the language of that law,”

In the said RR, it was stated that the suspension was meant to “ease the burden of taxation among proprietary educational institutions, especially during this time of COVID-19 pandemic.”

Reading the new revenue regulation, it is clear that the executive merely granted a reprieve. Permanent respite will come from Congress.

RR 14-2021 also took note of the bills being taken up in Congress to amend Section 27(B) of the National Internal Revenue Code of 1997 in order to clarify the tax imposed on schools.

One of these bills is Senate Bill 2272 filed by Angara to clarify that that the preferential tax rate shall apply to: 1. All proprietary educational institutions, including those that are stock and for profit; and 2. Non-profit hospitals.

For over 50 years private schools have been paying a preferential tax rate of 10 percent and with the passage of the Corporate Recovery and Tax Incentives for Enterprises Act (CREATE), the rate would go down further to one percent until June 30, 2023.

For schools that do not meet the category of being proprietary and non-profit, RR 5-2021 stated that they would be imposed the regular rate of 25 percent.

Angara explained in his bill that “Being proprietary and non-profit is a legal impossibility” because the term proprietary generally means one that is privately-owned and managed and run as a profit-making organization.

Private school organizations have raised their concerns about the impact of RR 5-2021 on its members, many of which have been struggling to keep their heads above water during the pandemic.

They said that an increase in their tax rate could lead to more closures since many of the schools are already experiencing financial difficulties.

The Committee on Ways and Means headed by Senator Pia Cayetano has already conducted a hearing on the bill.

Statement of Senator Sonny Angara
INCOMING DBM SECRETARY NI PBBM, HIGHLY-QUALIFED, MAY MAIPAGMAMALAKING TRACK-RECORD -- ANGARA
Statement of Sen. Sonny Angara on the Appointment of Amenah Pangandaman as DBM Secretary
PDIC charter amendments for a stronger and more resilient banking system—Angara
Kaugnay sa muling paglobo ng COVID cases sa bansa: “MAGPABAKUNA, SUMUNOD SA HEALTH PROTOCOLS AT PATULOY NA PAG-INGATAN ANG KALUSUGAN” - ANGARA
Statement of Committee on Finance Chairman, Sen. Sonny Angara on the signing of the 2022 GAA
Angara reminds PhilHealth of their obligations to the public
Threat of Omicron highlights need to improve biosurveillance and genome sequencing capabilities—Angara
Angara: Don’t let vaccines go to waste-- Allow booster shots for private sector workers
SEN. ANGARA ON THE THREAT OF HOSPITALS TO WITHDRAW FROM PHILHEALTH SYSTEM BECAUSE OF DELAYED REIMBURSMENTS OF CLAIMS:
Angara: Decline in COVID cases should not result in complacency
Angara: Go the extra mile to vaccinate our senior citizens
Angara to DOLE: Targeted interventions needed to ensure no one is left behind
It’s about time to rebuild the homes of the people of Marawi—Angara
Angara: Benefits for health workers should continue while the COVID pandemic is in place
Angara urges youth impacted by COVID to avail of jobs under the Expanded SPES Law
Angara: The national budget must be able to keep pace with COVID-19
Angara hopes to finally see the passage of the Magna Carta of Filipino Seafarers
Angara: Move towards digital payments welcome to all sectors
Angara tells DOH to speed up hiring of doctors and nurses for public hospitals
END_OF_DOCUMENT_TOKEN_TO_BE_REPLACED