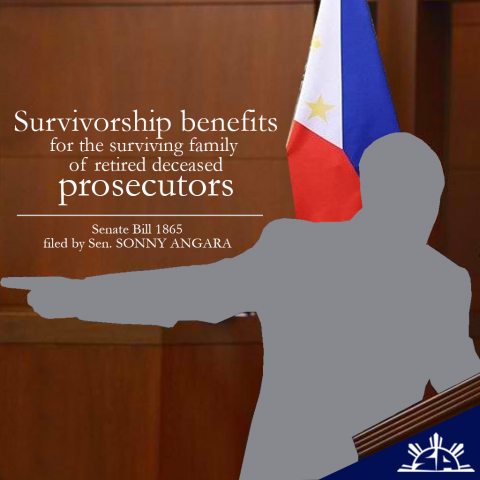 In recognition of the indispensable role of prosecutors in the country’s criminal justice system, Senator Sonny Angara is pushing for the grant of survivorship benefits to the members of the National Prosecution Service (NPS).

A lawyer himself, Angara took note of how retired prosecutors have no survivorship benefits unlike their counterparts in the Office of the Ombudsman or the judiciary even though the nature of their work is the same.

“Prosecutors are saddled with heavy caseloads and on top of this they face constant risks to life because of the nature of their work. The grant of survivorship benefits to the members of the NPS is but a small gesture of our appreciation of the work that they are doing in the service of the country,” Angara said.

One of the most recent attacks against prosecutors was in July this year when Jovencio Senados, the inquest division chief of the Manila City Prosecutor’s Office was killed on his way to work.

In filing Senate Bill 1865, Angara said it is about time the state recognizes the sacrifice NPS prosecutors have made and continue to make, risking personal safety as “instruments in the dispensation of justice.”

The bill provides that in case of death of a retired member of the NPS the surviving legitimate spouse and dependent children of the deceased prosecutor will be entitled to receive all the retirement benefits that he or she was already receiving.

In case of death of a NPS member who is already eligible to retire, the same survivorship benefits would also be provided to the surviving legitimate spouse and dependent children.

As defined in the bill, dependent refers to both legitimate and illegitimate children or adopted children who are chiefly dependent on the deceased member of the NPS, are not over 21 years of age, unmarried and not gainfully employed or if they are incapable of self-support because of mental or physical defect.

For the surviving spouse, the retirement benefits will be provided until he or she remarries.

In case the deceased has no surviving spouse or dependent children, the entitlement of retirement benefits would go to the parents.

The bill also provides for a retroactive application to include members of the NPS who died one year prior to its effectivity the law.

“With this bill we want to send a clear message that the State takes care of its own especially those who have sacrificed so much to serve its people,” Angara said.

Angara: Funding for the higher social pension for indigent seniors ensured under the 2023 GAA
Angara calls for institutional reforms in CAAP as part of the long-term solutions to the problems of Philippine civil aviation
Angara says funds are available to ensure the continued implementation of the Libreng Sakay program at the start of 2023
Statement of Senate Committee on Finance Chairman Sonny Angara on the Signing of the 2023 GAA
Brownlee’s naturalization will provide a big boost to Gilas Pilipinas
Angara says the Senate budget will provide targeted “ayuda” to the sectors who need it
SENATE APPROVES THE MARCOS ADMINISTRATION'S FIRST BUDGET
Angara pushes for conversion COVID isolation facilities to evacuation centers for disasters
Angara namahagi ng tulong sa mga lugar na sinalanta ng Bagyong Paeng
Angara: It's about time to recognize and do something about the plight of the country's Indigenous Peoples
Angara has high hopes for Philippine sports with the emergence of more winning elite athletes
Angara- Produce more high quality, high paying jobs to address youth unemployment and underemployment
Angara—Philippines’ hosting of 2023 FIBA World Cup presents countless opportunities for RP hoops and tourism
Angara: Focus on producing higher value industries, higher paying jobs to boost economic growth
Angara supports PPPs as the way to go for many local projects to ensure their implementation
Angara celebrates the enactment of three laws for the youth
Statement of Sen Angara on the Enactment into Law of the Social Pension for Seniors
Sen. Angara on the passing of former Pres. Fidel V Ramos
Angara-- Restore the heritage sites damaged by the Abra quake at the soonest possible time
Angara sees the establishment of satellite specialty hospitals as timely and doable
END_OF_DOCUMENT_TOKEN_TO_BE_REPLACED