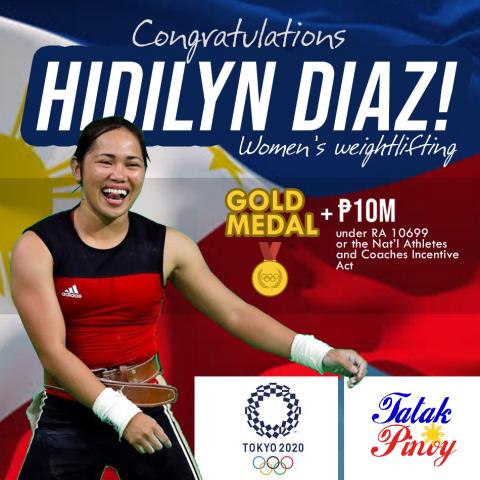 This was how Senator Sonny Angara described the feat of Hidilyn Diaz of winning the first gold medal in 96 years for the Philippines in the Olympic Games.

As the author and sponsor of Republic Act 10699 or the National Athletes and Coaches Benefits and Incentives Act, Angara said Diaz and her coaches will receive cash rewards for winning gold in Tokyo.

For Diaz, Angara said she will receive P10 million and an Olympic Gold Medal of Valor to be issued by the Philippine Sports Commission.

“The entire nation celebrates with Hidilyn for bringing home the elusive gold medal in the Olympics. This comes at a time when we are all longing for some good news. Salamat Hidilyn at pinakita mo sa buong mundo ang galing ng Pinoy!” Angara said.

PDIC charter amendments for a stronger and more resilient banking system—Angara
Kaugnay sa muling paglobo ng COVID cases sa bansa: “MAGPABAKUNA, SUMUNOD SA HEALTH PROTOCOLS AT PATULOY NA PAG-INGATAN ANG KALUSUGAN” - ANGARA
Statement of Committee on Finance Chairman, Sen. Sonny Angara on the signing of the 2022 GAA
Angara reminds PhilHealth of their obligations to the public
Threat of Omicron highlights need to improve biosurveillance and genome sequencing capabilities—Angara
Angara: Don’t let vaccines go to waste-- Allow booster shots for private sector workers
SEN. ANGARA ON THE THREAT OF HOSPITALS TO WITHDRAW FROM PHILHEALTH SYSTEM BECAUSE OF DELAYED REIMBURSMENTS OF CLAIMS:
Angara: Decline in COVID cases should not result in complacency
Angara: Go the extra mile to vaccinate our senior citizens
Angara to DOLE: Targeted interventions needed to ensure no one is left behind
It’s about time to rebuild the homes of the people of Marawi—Angara
Angara: Benefits for health workers should continue while the COVID pandemic is in place
Angara urges youth impacted by COVID to avail of jobs under the Expanded SPES Law
Angara: The national budget must be able to keep pace with COVID-19
Angara hopes to finally see the passage of the Magna Carta of Filipino Seafarers
Angara: Move towards digital payments welcome to all sectors
Angara tells DOH to speed up hiring of doctors and nurses for public hospitals
Angara to DOH: Provide health workers with hazard allowance as mandated by law
OWWA Law provides benefits and assistance to repatriated OFWs from Afghanistan-- Angara
Angara: Ramp up biosurveillance and genome sequencing to control the spread of new COVID-19 variants
END_OF_DOCUMENT_TOKEN_TO_BE_REPLACED