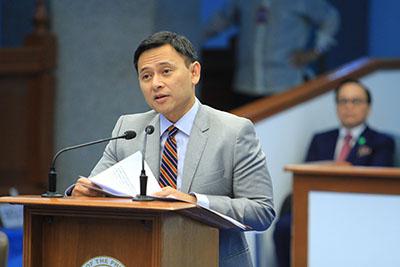 Reelectionist Senator Sonny Angara wants government regulators and Congress to look into the cause of the water shortage affecting parts of Metro Manila and Rizal province even as he called for long-term solutions to meet the country’s growing water demand.

This as Angara expressed concern over the ongoing water service interruptions across the concession area of Manila Water, causing inconvenience to many businesses and residents.

“It’s very concerning,” Angara said. “We have to ask a certain number of questions because we get conflicting reports. Is it a problem of service delivery?”

Manila Water, which covers the east zone of Metro Manila and Rizal province, has advised its customers to expect more water interruptions in the following days due to limited water supply as El Niño begins to set in the country.

Angara noted that while Manila Water had been suffering supply woes, its west zone counterpart Maynilad is not.

“One service provider is saying there is a problem, the other says none. That is something, I think, the regulators should investigate,” he said.

Angara said Congress should also look into the water shortage problem with the end view of coming up with long-term solutions to ensure adequate water supplies amid the country’s rapidly rising population and continued economic development.

“With the growing population and we all have these economic conditions, there will be a growing demand in the Greater Manila Area,” Angara said.

He added: “You really have to look at your supply many years down the road. That is something Congress can look into.”

At the same time, Angara underscored the need for structural reforms in the water sector as he noted that some 30 agencies of the government are currently involved in water and sanitation policy, among them the National Water Resources Board, the Local Water Utilities Administration and the Metropolitan Water Sewerage System.

The current setup, he said, is inefficient with jurisdictions overlapping one another.

“I think we really need a high level of discussion whether our underlying philosophies are valid and whether these agencies are serving the people well,” Angara said.

Statement of Senator Sonny Angara
INCOMING DBM SECRETARY NI PBBM, HIGHLY-QUALIFED, MAY MAIPAGMAMALAKING TRACK-RECORD -- ANGARA
Statement of Sen. Sonny Angara on the Appointment of Amenah Pangandaman as DBM Secretary
PDIC charter amendments for a stronger and more resilient banking system—Angara
Kaugnay sa muling paglobo ng COVID cases sa bansa: “MAGPABAKUNA, SUMUNOD SA HEALTH PROTOCOLS AT PATULOY NA PAG-INGATAN ANG KALUSUGAN” - ANGARA
Statement of Committee on Finance Chairman, Sen. Sonny Angara on the signing of the 2022 GAA
Angara reminds PhilHealth of their obligations to the public
Angara: Don’t let vaccines go to waste-- Allow booster shots for private sector workers
Threat of Omicron highlights need to improve biosurveillance and genome sequencing capabilities—Angara
SEN. ANGARA ON THE THREAT OF HOSPITALS TO WITHDRAW FROM PHILHEALTH SYSTEM BECAUSE OF DELAYED REIMBURSMENTS OF CLAIMS:
Angara: Decline in COVID cases should not result in complacency
Angara: Go the extra mile to vaccinate our senior citizens
Angara to DOLE: Targeted interventions needed to ensure no one is left behind
It’s about time to rebuild the homes of the people of Marawi—Angara
Angara: Benefits for health workers should continue while the COVID pandemic is in place
Angara urges youth impacted by COVID to avail of jobs under the Expanded SPES Law
Angara: The national budget must be able to keep pace with COVID-19
Angara hopes to finally see the passage of the Magna Carta of Filipino Seafarers
Angara: Move towards digital payments welcome to all sectors
Angara tells DOH to speed up hiring of doctors and nurses for public hospitals
END_OF_DOCUMENT_TOKEN_TO_BE_REPLACED